Many have taken the decision to use hydrogen as part of a rail decarbonization journey. However, there are different paths we may take to reach the same destination. Daniel Pyke, marketing campaign manager at Ricardo Rail, explores three routes to railways adopting hydrogen power.

How can railways adopt hydrogen power?

As stars are mostly made from hydrogen, I’ve taken a heavenly look at the three routes I see available currently:

1. The big bang – everything shiny and new.

2. The super nova – the birth of something new from something old.

3. The gravity sling-shot – using our environment to propel our progress.

The big bang – everything shiny and new

This route to hydrogen adoption grabs most of the headlines. As the big bang created our universe, so too the explosion in hydrogen technology delivers new trains powered by fuel cells from potentially green hydrogen. For many it is the ideal end point for rail routes where conventional electrification just does not make financial sense and the distances or duty are impractical for battery power.

However, there are many challenges to the big-bang approach. Cost is an obvious one, not just the new trains themselves, but also the new infrastructure to fuel them, the latter being a common theme in this article. Whilst hydrogen production serving just a rail site may be viable; investment is usually best planned as part of a holistic mobility strategy to share asset costs across both rail and other modes of transport. This is something Ricardo is working on with the UK government Strategic Innovation Fund (SIF) – more on that here.

The source of the hydrogen is a potentially contentious issue too. The majority of commercial hydrogen today is often considered “dirty” being sourced from fossil fuels, (brown/grey/black hydrogen – for more explanation on hydrogen colors see my previous blog). Is investing in fossil fuels acceptable in the current climate? That answer is often dependent on the nation. The aim is to utilize renewable or low-carbon power sources to generate green hydrogen, but as I write this, that (at scale) is still a developing technology, and new hydrogen production assets cost money requiring yet more investment support.

Then there are the perhaps hidden costs of this “big bang” approach. Replacing serviceable diesel trains and locomotives perhaps mid-way or less through their projected 40+ year life, incurs costs on the business balance sheet as diesel asset values are reduced to near zero.

There are significant people costs too. The new technology requirements of building, maintaining, and repairing hydrogen systems, fuel cells and battery energy storage means reskilling the existing workforce, a not insignificant challenge, as many industries are also racing to decarbonize other transport types at the same time too, increasing competition for suitably qualified personnel.

So, in short, whilst new fuel cell trains often grab the headlines, with several manufacturers announcing commercially available vehicles, there are still plenty of significant barriers to overcome to achieve hydrogen adoption through this route.

The super nova – the birth of something new from something old.

Existing rail fleets often contain a significant number of diesel rollingstock and locomotives which are increasingly environmentally unpopular, (despite their relatively low contribution to air pollution and carbon emissions arising from transportation). Rail rolling stock has lifetimes far longer than is typical for road transport vehicles, leaving fleet owners with a challenge of how to deal with assets that will have their lives cut short by recent environmental pressures and policies.

The super nova route to hydrogen adoption utilizes existing vehicles and retrofits hydrogen fuel-cells, delivering the desired emission free operations. An example of this is the HydroFLEX vehicle produced by Porterbrook.

This retrofit solution has the potential to lower barriers to hydrogen adoption by delivering cost savings. First the cost of an entirely new vehicle is avoided. Second, the business balance sheet impact is also lessened as vehicle and loco asset lives are not written off early (indeed there may be the potential to extend their useful life). Third, there are also some savings to be made on people investment too. As most of the vehicle remains familiar to operate and service, the re-training required for the new systems is not as extensive as that for a full new vehicle fleet.

However we must acknowledge that the same challenges remain surrounding the hydrogen source and infrastructure investments as mentioned previously in the big bang approach. Also, as it is much easier and lower cost to retrofit a vehicle with an existing electric traction platform, this option does not provide a lifeline for all diesel trains.

The gravity sling-shot – using our environment to propel our progress.

Just as rocket scientists use the gravity of our planets and sun to slingshot exploring space craft across our solar system and indeed beyond it, we can also use our existing railway environment around us to propel us on our transition to low carbon hydrogen powered transport if we are ingenious.

Most railways have many diesel trains and locomotives, of which a significant proportion are not near the end of their life. This fleet inertia is often seen as a costly barrier to large scale hydrogen adoption. But what happens if instead of regarding it as a barrier, we instead regard it as a platform to drive hydrogen adoption forward in an evolutionary rather than revolutionary manner?

Can we burn hydrogen in existing engines instead of diesel?

There are modifications needed, but the engineering reality is, it is perfectly possible to create a Hydrogen Internal Combustion Engine (H2ICE), and indeed it is also feasible to modify existing engines to run on hydrogen. Combustion engines are a very well researched and developed technology with Ricardo being active in this area for over 100 years). In fact, Sir Harry Ricardo was researching hydrogen as a fuel for combustion engines as far back as the 1920s. 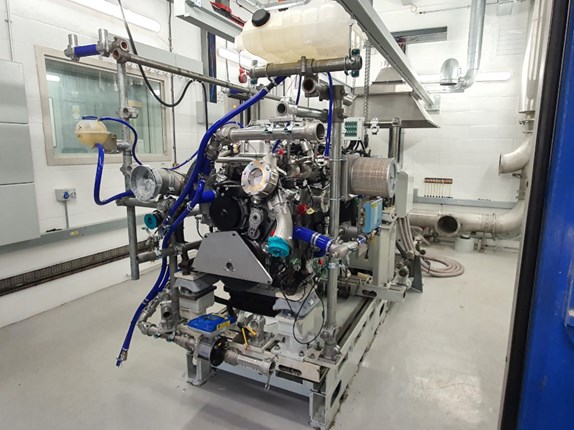 Above: Ricardo prepares to test a hydrogen heavy duty engine

The hydrogen internal combustion engine option lowers several of the barriers to large scale hydrogen adoption. It lessens the initial upfront investment in the vehicles still further. Instead of replacing entire powertrains, we are now modifying existing engines and fuel systems, and this option is also suitable for rollingstock without electric traction, giving retrofit options to a greater proportion of diesel vehicles. There are also people benefits too as the training requirements are much reduced as the hardware changes on a vehicle are less extensive.

Existing fleet lifetimes are also preserved or even extended rather than being cut short – a significant issue for large vehicle fleets.

The investment barrier for hydrogen production infrastructure remains as previously. However, a perhaps useful trait of internal combustion engines is that they are far more tolerant of lower purity fuel than that needed for fuel cells. This robustness to non-optimal fuel (and service conditions), could potentially reduce the requirements of the hydrogen production infrastructure, lowering this barrier to adoption too.

Whilst modifying existing engines may not grab the same headlines as a shiny new train, it also does not require the high capital investment costs, together with the embedded carbon costs for a new vehicle fleet.

In an often capital constrained industry the use of hydrogen combustion engines as a stepping-stone technology may well enable a more manageable and perhaps more efficient path to achieve our goals of decarbonized transport for many.

Which is the best route to take for hydrogen adoption in rail?

There is no one perfect solution that fits all situations. The differing financial, policy and even societal environments mean the landscape is complex and there is likely a place for all three paths to aid hydrogen adoption in the drive to decarbonize railway transport.

With demonstrable experience across all three routes, together with a technology agnostic viewpoint, able to evaluate the optimum solution for each situation, the Ricardo teams look forward to helping your rail network to find its route to decarbonization.

For more info on hydrogen pathways for rail and the potential for combustion engines, below is a 25 minute video from the recent Electric & Hybrid Rail Technology conference by my colleague and global decarbonization development leader, Jonathan Brown.