Coventry Very Light Rail (VLR) in the UK has taken a major step forward as Coventry City Council and WMG, University of Warwick, have showcased a breakthrough new track design which aims to drive down the costs associated with the installation of urban light rail. 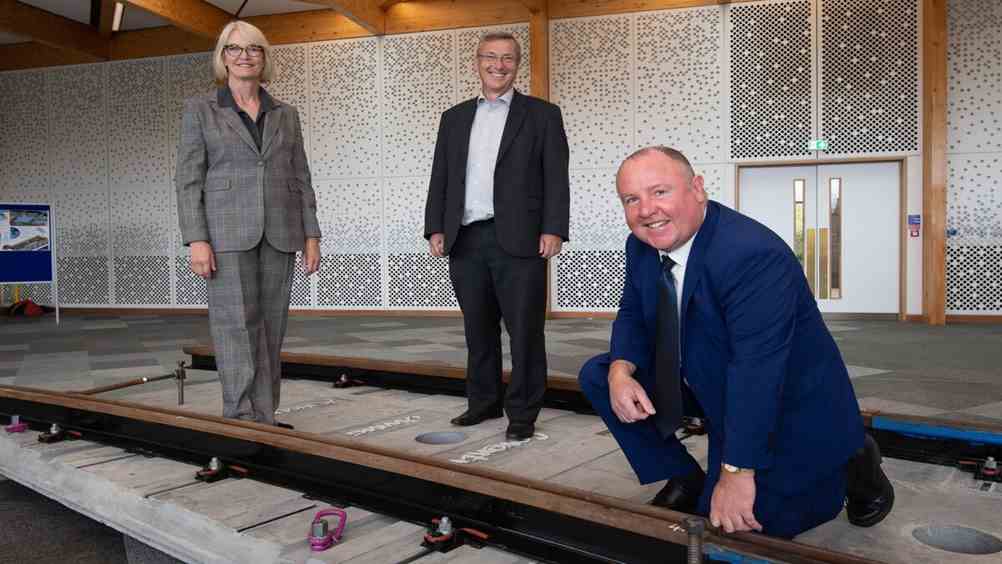 The new track form was designed and developed by engineers from WMG in partnership with Ingerop and its UK subsidiary Rendel. Coventry VLR has the potential to transform public transport in Coventry and in smaller and medium sized towns and cities, enabling the next generation of clean, green transport.

WMG and Ingerop successfully created, designed, and built the novel track form, designed to sit just 30 cm inside the road surface, making it easy to install and remove, significantly reducing the impact on utilities and potentially saving millions of pounds lost to excavation and moving gas, electrical and telecommunication systems.

Councillor Jim O’Boyle, cabinet member for jobs, regeneration and climate change, said, “It’s incredible to see this one-of-a-kind, Coventry-led project move even closer to completion. Coventry Very Light Rail has the potential to provide Coventry, and towns and cities across the UK, with an affordable, high-quality transport mode using clean, green energy and it further cements our ambition to lead the green industrial revolution.”

The track form has been developed in parallel to a zero-emission, battery-powered lightweight shuttle vehicle developed in partnership with Transport Design International (TDI), which will become autonomous, working like the London Underground system, where there is no timetable and passengers can hop on and off.

The vehicle is lightweight, and there will be no overhead power supply which is both costly and can have a negative impact to the cityscape.

Dr Darren Hughes, associate professor at WMG, University of Warwick, said, “The main driver of the Coventry VLR project was to make light rail as affordable and environmentally friendly as possible, and the track is a major part of this.”

Philippe-André Hanna, director for transportation at Ingerop, added, “Light rail provides comfort, safety and frequent services, and has the potential to take people out of their cars and reduce air pollution. We had been working over many years on how to optimize the depth of the track form from the usual typical depth of 56 cm one to reduce costs and to avoid having to divert any utilities.

“When we met WMG, University of Warwick and Coventry City Council, we were immediately struck by the potential to bring about a revolution in the light rail market and found the project extremely exciting. Together with WMG, and our UK subsidiary Rendel, we created a fully integrated team and found a true spirit of a collaboration within the whole group. This allowed us to create a great product, which is extremely innovative, and thanks to that we have succeeded to reach a new standard of a 30cm depth of track form construction. Reducing the depth of excavation, and avoiding the diversion and impact on all utilities, we expect a much lower cost of construction than the usual light rail systems.”