Riding Sunbeams and Network Rail reveal how they worked together to investigate how power from solar farms can provide traction energy for electrified trains, making the already sustainable form of transport even cleaner

In 2019 Riding Sunbeams, an innovator focussed on decarbonizing rail traction networks through the development and connection of solar, wind and energy storage assets, bypassed the electrical grid and supplied traction power direct from solar panels to the third rail outside Aldershot, Hampshire in the UK. According to UK infrastructure operator Network Rail, this world-first has potential to provide 10% of traction power across England’s DC networks.

Riding Sunbeams is poised for its first full-scale commercial implementation and pursuing a solution to supply solar power direct to AC electrified lines. The enterprise germinated from the desire of climate charity Possible to connect a 5MW community solar farm at Balcombe, West Sussex in 2014.

“We had a sympathetic landowner and south-facing slopes, but no grid connection,” recalls Riding Sunbeams’ director, Leo Murray. “Meanwhile, it was rail-adjacent and connecting to the third rail just seemed like it ought to work.”

On the southeast commuter network, 200 rail-side solar farms could meet 15% of total traction demand. “The upshot of the feasibility study was that it’s feasible,” says Murray. “We came away confident we could supply traction energy at a lower unit price than Network Rail pays for grid power.”

Plugging in to the DC third rail

Initially, Riding Sunbeams assumed it would use a DC-to-DC converter to connect DC photovoltaic output to the DC third rail and minimize conversion losses. “But actually, we would need a bespoke converter,” adds Murray. “Nothing on the market was suitable and because rail is so heavily-regulated, developing new power electronics is prohibitively onerous and expensive.” But the existing supply architecture offered another way to plug in solar with off-the-shelf equipment.

Southern England’s DC network is dotted with traction substations at 3km to 5km intervals, connected via grid supply points (GSPs). Each GSP supplies about eight or ten substations with 33kV feeder cable; in each substation, a 12-pulse diode rectifier converts AC to DC and pushes 750V DC to the track.

Meanwhile, when light hits the semiconductor material in solar panels, they produce a DC current. In a solar farm, strings of panels are connected to an inverter, which converts their combined DC current to an AC output for distribution. Still following? Good.

“The 33kV AC feeders from GSPs to traction substations have similar electrical characteristics to distribution networks,” explains Murray. “We can use off-the-shelf inverters, designed to connect solar to distribution networks, to connect to ancillary transformers in substations. We’re not pushing solar power directly to the tracks, but supplying those feeder cables. It’s mass-manufactured technology at a low price-point and relatively trivial to install.”

“Commercial inverters use control algorithms to pull DC current from strings of panels and high-frequency switching to convert it to low-voltage AC output,” explains Bottrell, who now advises Riding Sunbeams as a principal consultant at Ricardo. “Using a transformer, we match the voltage required to export to Network Rail’s private AC feeder network.”

“One challenge is matching solar generation to demand without integrated storage,” says Murray. “Traction demand is very peaky: a train passes, then demand drops back to nothing.” The DC-to-DC direct connection first envisaged would only supply one 5km track-section. “Supplying the feeders spreads our generation across all substations supplied by that 33kV feeder,” he explains. “It gets used anywhere a train accelerates on those electrified sections. 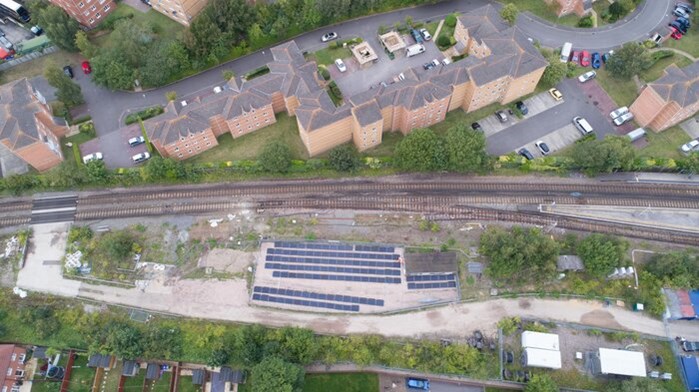 “We proved it works outside Aldershot Station in 2019,” Murray continues. The First Light project connected a 100-panel photovoltaic array with around 39kW total output to a DC substation ancillary transformer. Network Rail believes it was the first such effort to supply solar direct to traction systems anywhere in the world.

“Cuckmere Community Solar [in Berwick] had planning permission for a solar farm but no grid connection: exactly the problem we set out to solve,” Murray explains. “It has an attractive end-customer next door: the electrified railway. Grids are at capacity, but railways are effectively a shadow-grid with their own demand and proximal native suppliers with no route-to-market.”

In Britain, the 20% DC traction load-share Riding Sunbeams could theoretically supply diminishes to 10% due to land-use constraints. “It’s one in ten trains,” says Murray. “There are fixed costs and hard thermal and voltage limits to what we can connect at one location.”

It involves none of the policy and grid access costs bundled into Network Rail’s ten-year contracts, which will not insulate it indefinitely from global price-rises. “The energy crisis increases our business-case,” adds Murray. “Solar is already cheaper than gas-supplied power and continues its downward trajectory.”

Railway electrification in Britain dates from the nineteenth century and 38% of routes are electrified. Of these, 64% use 25kV AC overhead lines and 36% the 660/750V DC third-rail system.

Elsewhere, Riding Sunbeams believes it could supply 10% of DC lines with commercially available inverters, but proposes a parallel solution for the 64% of UK electrified lines using overhead 25kV AC.