Alan Hamilton, VP of engineering at Wabtec Corporation speaks to Electric & Hybrid Rail Technology magazine about the development of the FLXdrive – a 100% battery heavy-haul, freight locomotive, and the company’s plans for a second generation, more powerful electric locomotive. 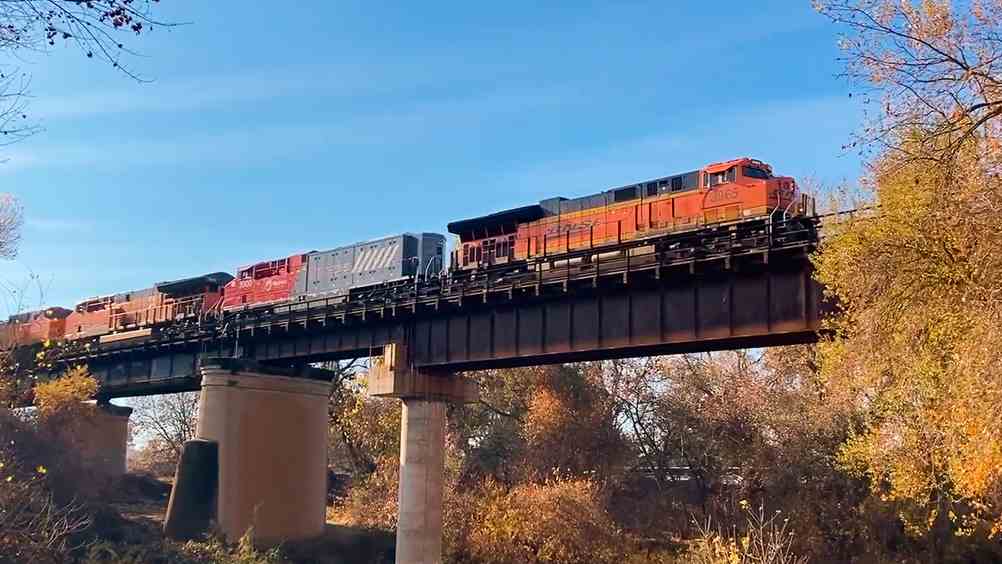 Tell us about the history behind the FLXdrive.

Wabtec draws upon its history of excellence in engineering and innovation to develop environmentally efficient and solution-oriented products that are designed to meet the individual needs of our customers. Over the past several years, we’ve demonstrated our focus on sustainability through reliable, clean, and innovative transportation products, but we are committing to do more.

Wabtec had been working on train energy management, battery technology and its application to heavy-haul, freight locomotives for years. Advances in battery capacity, reduced costs and improved computing capabilities make it the right time to apply the technology to rail.

Wabtec started developing the FLXdrive in 2018 after winning a grant with BNSF [one of the largest freight railroad networks in North America] from the California Air Resource Board to test a 100% battery heavy-haul, freight locomotive.

Tell us more about the BNSF pilot with the FLXdrive?

The Zero- and Near Zero-Emission Freight Facilities Project is part of California Climate Investments, a state-wide initiative that puts billions of Cap-and-Trade dollars to work, reducing greenhouse gas emissions, strengthening the economy and improving public health and the environment — particularly in disadvantaged communities.

The pilot ran from January through March 2021 between Barstow and Stockton, California. The route was approximately 350 miles long. The 2.4 MWh battery locomotive operated with at least two Tier 4 locomotives in a hybrid consist hauling revenue freight for more than 13,300 miles.

The FLXdrive delivered more than an 11% average reduction in fuel consumption and greenhouse gas emissions for the entire train. It is the equivalent of over 6,200 gallons of diesel fuel saved and approximately 69 tons of CO2 emissions reduced.

How does the FLXdrive battery-electric locomotive work?

The FLXdrive battery-electric locomotive runs on 100% battery power. It is charged at a rail yard and then recharges throughout the journey through dynamic braking. A traditional locomotive burns off the tremendous energy generated from braking as heat. The FLXdrive is intended to be integrated into multiple unit consists with the overall train energy management under the control of our Trip Optimizer train control software. This allows the optimal dynamic brake recharging and traction discharging of the battery to maximize train fuel savings and battery life.

This video is a great visual demonstration of how the FLXdrive works:

How much space does the battery solution take up on the locomotive?

The beauty of this technology is that it can be applied both as a retrofit like the locomotive for the California pilot or as a new build. It is a flexible solution.

How is the locomotive charged?

The FLXdrive is plugged in at the rail yard to charge. It takes roughly four hours to get fully recharged. The locomotive then constantly recharges throughout the journey through regenerative braking.

How does regenerative braking work?

The dynamic braking on the FLXdrive battery locomotive uses the electric AC traction motors as generators when slowing the train down. On a traditional locomotive this braking energy is dissipated in the form of heat. On the FLXdrive, the traction motors have the primary ability to store this dynamic braking energy into the battery versus wasting it as dissipated heat, thus allowing more efficient train operation and fuel savings. Dynamic braking reduces wear on friction-based braking components, and regeneration into the battery lowers net energy consumption.

How was AI used to improve efficiency and reduce demand on the battery?

The energy management system, which is based upon our popular Trip Optimizer product, knows in advance the route profile, curvature, hill, load behind, traffic ahead and other important factors in the journey. With the proper algorithm, it calculates and optimizes the control of the consist to ensure the optimum time to charge and/or use the battery to minimize the fuel consumed of the complete consist.

For example, a train is leaving the Port of Los Angeles heading to Barstow. The consist, with its 5,000 tons of freight will travel across the city.  The locomotive consist could transition to “near-zero emission” mode, turning off the engines of the two diesel locos in the consist and running solely on battery power, while operating in the urban area, thus reducing emissions and noise.

Getting out of the sensitive urban area, it could transition back into “fuel saving” mode charging and discharging the battery to optimize fuel economy along the route.

This flexibility is currently unseen in the market and the impact on environment and customer operating expenses will be significant. This technology gives Wabtec another first of with the first freight mainline battery-operated locomotive on the market.

Is FLXdrive the only project the company is working on in this area?

Wabtec is focused on several battery applications for the rail industry. The company is focused on the next generation of the FLXdrive and the design of a hybrid battery work train for New York City Transit. The technology can be applied to switchers as well.

The next-gen FLXdrive we are developing will have more than 6 MWhs of energy and power capability to match the existing 4400 horsepower freight locomotive. It is intended to be integrated into multiple unit consists with the overall train energy management under the control of our Trip Optimizer train control software. This allows the optimal dynamic brake recharging and traction discharging of the battery to maximize train fuel savings and battery life.

A fleet of second-generation FLXdrives will be commercialized and could enter supply chain routes in the next few years.

What key challenges remain with regards to using batteries for rail?

Is Wabtec focused on battery-electric locomotives or is it also exploring fuel cell/hydrogen trains?

Wabtec’s goal is to develop the next generation of zero-emission locomotives. The company has a clear path to power new locomotives – and repower existing locomotives – with batteries and hydrogen technologies. It is part of Wabtec’s vision for the rail industry to play a key role in building a clean energy economy and reduce carbon emissions globally by up to 300 tons per year.

To support that effort, Wabtec Corporation and General Motors announced in June that we will collaborate to develop and commercialize GM’s Ultium battery technology and HYDROTEC hydrogen fuel cell systems for Wabtec locomotives. Wabtec will bring its expertise in energy management and systems optimization, to develop a solution for heavy haul locomotives that takes full advantage of GM’s advanced technologies.

It is part of a vision Wabtec, Carnegie Mellon University and Genesee and Wyoming laid out for reducing emissions and operating costs through zero-emission locomotives and network optimization.

Read all the latest news from Wabtec: